I initially wrote this article on spiritual battle exactly two years ago this month. Being in the midst of a pandemic, It feels appropriate to update and republish for 2020. I pray you are blessed in reading.

Growing up, there was not much TV watching in our home. While I was a toddler, my parents were in Bible college.  At the age of twelve, we were on the road traveling to raise support for my father’s ministry. I can remember the small 13-inch black and white television that I was allowed to watch cartoons. It was a battle for my mother to pull me away from the tv to do my homework or anything else for that matter.

After settling in Houston, Texas, there was a large TV that we got from my favorite grandmother once she’d passed away. The first television show I remember seeing in color was the Incredible Hulk. We would gather around as a family and watch it on Friday nights. It did not happen that often because I usually had a football or basketball game. My father did not have much time to watch television. When he did, it was usually something on PBS, or he’d catch an episode of Star Trek after us kids had gone to bed.

All about the Knights

One of my favorite movies that I enjoyed watching was something my father had taped on VHS. (Google it young people-it was before DVD’s, Smartphones and tablets) The story of King Arthur and the Knights of the roundtable. Even though it was make-believe, it had everything—heroes, magic, good versus evil, and sword fighting.

Oh, how I loved the knights! The fact that my favorite knight was Sir Lancelot, who stole the heart of King Arthur’s bride, tells you where my head was as a teenager, but I digress. The man to man combats and swordplay that took place in each battle captured my attention like nothing else. I still enjoy anything having to do with knights. From King Arthur, The Crusaders, and another favorite is Robin Hood.  Watching knights sitting tall in their saddles riding out to battle in their shiny armor still gets me excited in anticipation of what lies ahead.

There is a battle that, for most of my life, I lived unaware. The battle that takes place daily in the spiritual realm.  I am not referring to cute little witches and goblins, but there is a real battle with lives at stake.  This battle is mentioned several times throughout scripture. God urges us to be on alert because spiritual warfare will continue in earnest until He comes again.

This spiritual warfare taking place does not apply only to men. Men and women of all ages, creeds, and colors are affected by this battle. One glorious thing about our Savior, Jesus Christ, He has not left us as Christians helpless in this spiritual struggle taking place. We can head into battle prepared. Click To Tweet

The Armor of God. Just think about that for a minute. Can you think of anything better to dress in heading into battle? We cannot defeat the enemy in our own strength. Paul says to “put on” the armor indicates that the armor is always there for us. We don’t have to find the armor, but we must put on the armor daily, preparing for the enemy.

However, spiritual battles can occur at any time. After publishing my first book at the end of 2016, I was rearing to go- marketing and promoting Unleash the Power of Prayer in your Life.

Within days of publication, I encountered tremendous physical pain that prevented me from doing much of anything. The pain was excruciating, debilitating, messy, and bloody. What’s going on, God? I thought you wanted me to write this book? Those were just a couple of the questions I said to myself as I was physically off and on the shelf for several months.  It was so bad I couldn’t get in the shower and was forced to get bed baths. I felt like I was back in the hospital again. I was definitely in need of God’s armor. 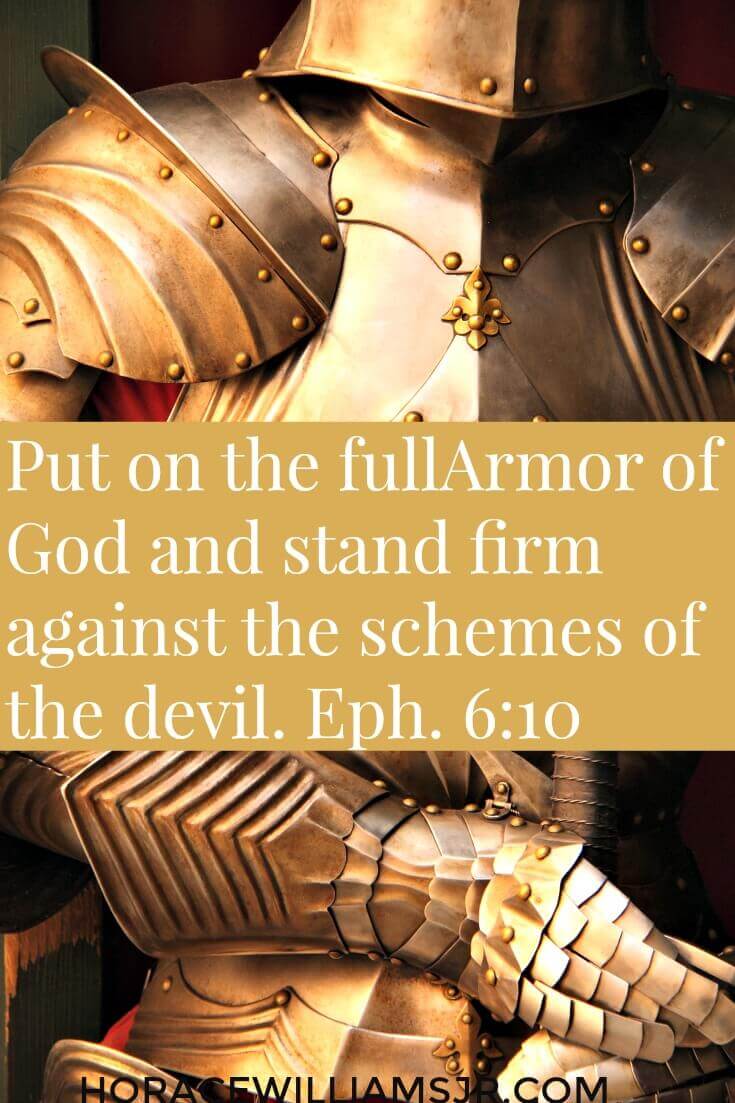 Wise Words of a Friend

About six weeks after my book on prayer had been published in 2016,  Marva Smith of SunSparkleShine

interviewed me. It was so refreshing and, at the same time, exhilarating to share why God had inspired me to write this book. Marva asked me some insightful questions, and working with her was such a blessing. In fact, Marva would later volunteer to write posts on my blog in the following year because she knew how much I was hurting. The Mother’s Day post she wrote is one of my most favorite to this day.

One of the women who responded to my interview was Lori Schumacher at LoriSchumacher.com. She is a warrior for Christ, a mother, wife, and someone who has experienced the joys and pains of adoption. You can get a copy of her book titled, Surrendered Heart by visiting her website.

Lori left me a comment over three years ago. I’m sure she has no idea how her words continue to inspire me.  I shared her insights that she said to me at the men’s Sunday school class that I was asked by my assistant pastor to lead one Sunday. Here is her quote word for word.

Arm Yourself Daily for Battle

“Great interview with Marva, Horace! You both are two of my favorite encouragers and hope-givers! Praying your book continues to bring people closer to Jesus. I’m also praying for you – for your physical and emotional health. Writing a powerful book on prayer puts a target on your back with the enemy. So in the midst of all of this, may your armor be complete and a hedge of protection placed firmly around you.”

“May your armor be complete” Just like the Bible states-God is instructing us that every single piece of His armor is needed every day. Can you imagine starting your day with the sword of the spirit-His Word, but not carrying the shield of faith with you as well? Or what if you don’t put on the breastplate of righteousness or you forget to put on your shoes of the gospel of peace. Do you think you may have severe struggles throughout that day? I believe so.

I had never thought of myself as a target for Satan until that message from Lori. It did not make me fearful or scared. It gave me hope-hope because I was doing the Lord’s will instead of living for myself. As I shared in the Sunday school class, Satan was plenty pleased with how I was behaving before my stroke. There was no attacks-in fact I’m sure there were days that He was cheering me on.

Weapons of the Enemy

Some of Satan’s favorite tools that he likes to attack us with each day are the fiery darts of doubt, fear, and discouragement. However, another one of his most effective weapons that is just as equally effective is ISOLATION. ( Something that we are faced with nowadays.) When I recommitted my life to Christ in 2012, the church where that took place was over twenty-five miles away from my new home.

Since a family member totaled my car while I was recovering from my stroke, I usually had to make plans to get there. It became more difficult to attend both church and Sunday school during this time in my life. That was so disappointing because my hunger to hear God’s Word at that time was ravenous. After a while, I had to stay home and listen to my favorite preachers on the radio or watch them on TV/DVR. I did not even begin to realize that I was living as an isolated soldier for Christ.

We ALL need SUPPORT

God does not send us out to battle unprepared and does not desire us to do it alone. When you live isolated, you become vulnerable to the attacks of Satan. Don’t be foolish and convince yourself that you are okay on your own studying your Bible and praying. Those are excellent things to do consistently in preparing your heart for the conflicts you may face. However, you need the support, love, and encouragement of your brothers and sisters in Christ.

There are fellow soldiers who may be experiencing or have experienced a similar battle. It is with them you can find support. Now that I have moved closer to my sister, Sonya, and her family. She picks me up and takes me to church regularly when I’m well enough to go.  In the Summer of 2016, I became a member of Matthew Road Baptist Church. I am active with my Sunday school class and have made friends with Christian men and women of all ages.

I am sincerely blessed by the fellowship of going to church with my family. Encouraged by the handshake or a hug from a brother or sister in Christ. (Boy, do I miss those things right now! I can barely recognize everyone with their masks on.) However, I’m comforted knowing that the prayer requests I share are being prayed for by those who love the Lord. The assistant pastor meets with me in my home for fellowship consistently. Hopefully, we will do that more often once the coronavirus is under control. He has become a close friend and mentor in the process.

With all prayer and petition, pray at all times in the Spirit, and with this in view, be on the alert with all perseverance and petition for all the saints. -Ephesians 6:18

Therefore, encourage  one another and build up one another, just as you also are doing. -1Thessalonians 5:11

Even Jesus was isolated in the wilderness for forty days and nights before being attacked by Satan with temptations. (Matthew 4)  I hope you will guard against being isolated too often yourself. Yes, we all need quiet, isolated, and refreshing solace at times, but remaining separate damages our effectiveness as Christians in this ongoing battle. This battle goes beyond just yourself. Is there a sister or brother in Christ you have not conversed with recently?

Who comes to mind right now? Maybe you should reach out to them and go for a coffee or take a walk together or meet for lunch. Give them a phone call and pray with them. Send a quick email of encouragement to overcome the distance. Schedule a zoom or face time with someone so that you can see a friendly face. Make it a point to ensure your brother or sister in Christ is not isolated by the enemy giving Satan the advantage. We have the victory in Christ, so head into battle dressed in the armor of God surrounded by your fellow soldiers in Christ. Be on the alert for the enemy!

In the midst of a global pandemic, God has blessed me to release a new Christian book of inspiration and hope. It titled, The Furnace of Affliction: How God Uses Our Pain and Suffering for His Purpose. Endorsed by Sheila Walsh, this book delves into understanding God’s purposes even in our most difficult, trying, and painful circumstances. You can grab your copies by clicking on the image below. 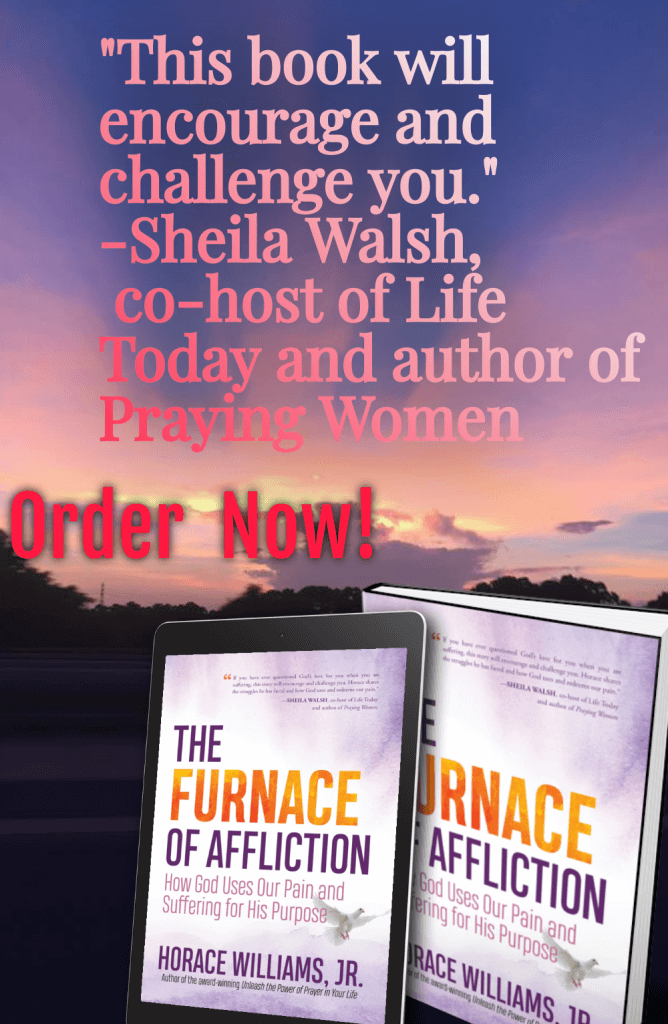 18 thoughts on “Being Isolated in a Colossal Battle-Advantage Satan”